Did you know Levi Strauss—the inventor of Levi's jeans—was an immigrant from Germany? 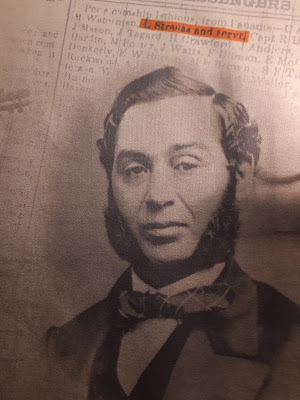 I live about a half hour away from the house he grew up in. It has since been turned into a museum, and today, we took the kids to see it. So how did Levi Strauss go from being a poor kid in Germany to the founder of a wildly successful American clothing company?

He was born in 1829, one of seven children of a Jewish family in Buttenheim, in the Kingdom of Bavaria, in the German Confederation. The entire family lived in only two rooms of the house pictured below; only one room had heat.

Levi's name was originally Löb Strauss, and he left Germany for the US at age 18, due to the occupational and personal restrictions imposed on Jewish people in Bavaria at the time.

Within three years, he'd changed his name from Löb to Levi, worked to learn English and took on American citizenship. He and his family started a dry goods business, and Levi moved to the west coast to provide goods to people heading out for the California Gold Rush.

One of his customers was Jacob Davis. Davis figured out a new way to use rivets on pants, to make them sturdier, but he didn't have enough money for the patent or to get the business off the ground. He asked Levi to work with him.

By 1890, the famous 501s were being produced under that model number.

Later, he left the running of his company to his nephews and worked as a philanthropist, among other things. He passed away in 1902. 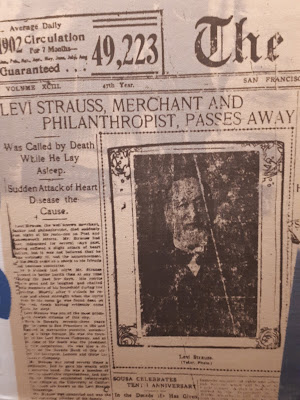 All pictures by me.
Posted by Laura Rueckert at 7:55 PM