On the very last day of my vacation, my aunt dropped by to give me two books she’d found in my grandfather’s house after he passed away. 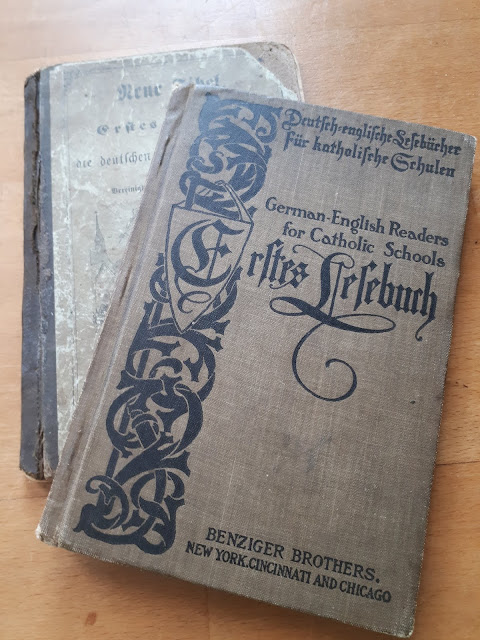 That grandfather’s line of my ancestors came from Germany and apparently lived in a German-speaking community once they reached America where it was important they continue to learn the language.

One book was published in 1872, the other in 1909. The older book is in pretty bad condition, worn and torn. Both prove that scribbling in textbooks is not a modern behavior. Mary Rothermel traced the pictures in now-faded ink and wrote her name and age (8) in the margins of the older book. Hildegard Paulus signed her name over and over in the 1909 book—and dated it January 5, 1912. I'm not sure, but I don't believe either girl is related to me. It's likely that ma family got the books second hand.

The 1872 book is alled Neue Fibel oder Erstes Lesebuch für die deutschen katholischen Schulen. It is completely in German despite having been printed in the US.

By 1909, many of the students must have been stronger at speaking English than German. The 1909 version has two titles—one in English and one in German. It's called German-English Readers for Catholic Schools: Erstes Lesebuch and contains German words and phrases along with English translations.

Some highlights (especially for my German readers).

And sentences to learn reading and writing that illustrate it was a different time: 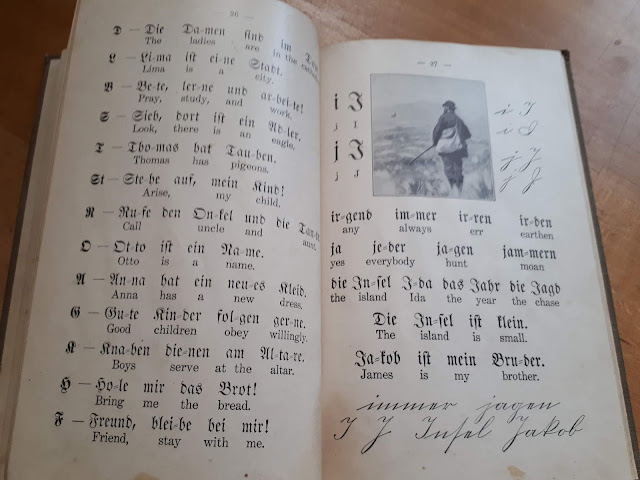 I did a little research, and it turns out the publisher, Benziger Brothers, is still operating today. Founded in Switzerland in 1792, the first American printing house was opened in 1853. It is currently based in Cincinnati, Ohio.

all pictures by me
Posted by Laura Rueckert at 4:45 PM No comments:

“You haven’t seen a tree until you’ve seen its shadow from the sky.”
-Amelia Earhart


I think of my dad as kind of a vehicle genius. It doesn’t matter what it is—he can drive it, expertly. Cars are the simplest things. How about an 18-wheeler? No problem. A boat? All the time. A motorcycle, a snowmobile, a four-wheeler, a huge tractor…if it’s got a motor, he’s a master.

So there’s one special thing he drives that most people aren’t used to seeing in a "normal" person. Our family isn't rich by any means, but my dad owns his own airplane.


It isn’t a huge jet (google pictures of John Travolta’s home if you want a jaw-dropping moment) but a teeny-tiny two-seater built in 1946. Yes, that’s 1946. He bought it used years ago. It’s so thin and lightweight, he pushes it out of the hangar by hand in about two seconds.

I remember hanging around small airports as a kid, bored while while he talked to the airport geezers in their loose, greasy overalls or while he tinkered around on the plane. It felt like ages but was probably only 20 or 30 minutes of going through a checklist.

Waiting was boring but we grew up soaring through the air like it was a normal, everyday thing. Flying in a small plane feels nothing like traveling in a jet. It wasn’t until I was twenty that I flew with a commercial airline for the first time. I was so excited…and then so disappointed. I didn’t feel hardly anything. Turning and banking. Dips. Meh.

One advantage of a small plane is that you aren’t necessarily way above the clouds. You’re up high and can see everything, but you’re low enough that you can still see everything. The murky cloud a boat trails behind it on a still lake, the Christmas tree farm built in a circle with an irrigation system running around it like the hand on a clock, your family waving as you do a fly-by. 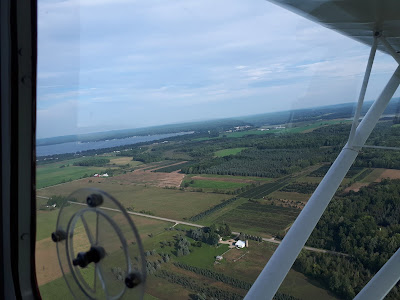 I was on vacation last week, so I got to ride with my dad in his plane again. And I have to admit it—I’ve gone really soft. We had some bad luck with the weather and it was a kind of windy day, so I FELT EVERY BUMP. In a plane that small, there’s nothing to hold on to but your own pantlegs.


As a kid, I took it all for granted. It was a while before I realized what an unbelievably special thing my dad shared by flying with me.

All pictures by me or my family.
Posted by Laura Rueckert at 12:11 PM 1 comment: