My family and I spent this summer vacation in North Rhine-Westphalia, Germany. We stayed in an area called Sauerland at a campground right on the lake Hennesee. Being from Michigan, and living in a lakeless area of Germany, I was really excited to be on the water for a whole week.

Turns out, the advertising was a little misleading. A main road separated the campground from the lake. And there was a bigger, more important difference.

The lake was man-made, created from a dammed up river. It turns out they were cleaning this portion of the lake, removing truckloads of muck and silt. So the below picture shows the "swimming area" for our campground.


Disappointing, but the rest of the lake was still full of water, and we enjoyed a nice boat ride. The temps were pretty low, but the kids even managed to get in some swimming at a stony beach down the road, at least until they came out with teeth chattering. 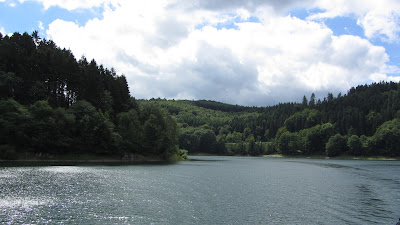 We also got to walk on the dam itself. 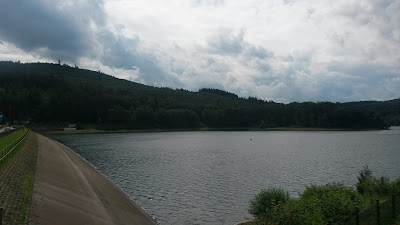 The area is extremely hilly, and a long, long, long stairway was built so you can walk up to the top of the dam from the other side. Seriously, once on these stairs was enough.


The region is known for its slate mining, and many houses were covered in it, giving them a dark but really unique appearance.


Being a reader, I liked the buildings in the village of Eversberg even better. They had phrases painted on them. My favorite house reminded kids to keep their bedrooms clean!


In Eversberg, we hiked up to the ruins of a fortress built in 1242 for a lovely view. 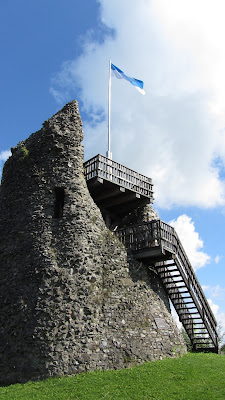 Something I wouldn't have noticed on my own, but my husband did, is how all of the roofs are dark slate, compared to the red tiles in Franconia, where we live.

As for whether I'd recommend this area for a vacation...let's just say there were some nice aspects, but it was generally less suitable for sightseeing that most of the places we've vacationed in Germany recently. But we enjoyed our relaxing time there nonetheless.

All pictures by me or my family.

Posted by Laura Rueckert at 6:56 PM No comments: