So, my advent experiment this year was a young adult short story broken into twenty-four tweets. One was published each day on Twitter.

Thanks to those of you who followed it, and especially to those who favorited and commented.

What has my advent experiment taught me?
- I think Twitter moves too fast for the reader to keep up with a story over the course of a month.
- Also, although it's possible to search for the hashtag, someone hijacked my hashtag, so the unrelated tweets were confusing.

What do you think? Would it be worthwhile to attempt it again next year?

Anyway, if you don't have Twitter or found it too difficult to follow, here's the consolidated version. I removed the day numbers and hashtags and fixed the paragraphs for easier reading. Keep in mind that I tried to make complete thoughts each day, so the writing isn't as smooth as it would be without the 140 character limitation.

The North Pole Break-In, A Short Story in 24 Tweets

If he was an elf, I was a saint. He was my age, a head taller than I was and wore nothing but a bathing suit and a Santa hat. And this hottie had just caught me breaking in.

"What do you think you're doing?" he asked as I slid over the window sill.

I'd overcome tripwires, laserbeams, a security system Frost would drool over, & the sensitive noses of the reindeer. Only to be nabbed now. I didn't answer. The important point was, I'd gotten inside.

"Come with me," he sighed with a scowl.

I gave him the finger. He grabbed hold of it between his thumb & forefinger, grinned like the devil, then dragged me behind him.

Mr. Claus? What about the beard and the bowl full of jelly? The only thing filling this guy's belly was a 6-pack o'yum.

The man jerked back. "Intruder!"

Sexy Santa raised my finger. "Got her."

His voice saying those words shouldn't make me want lean close enough to feel him whispering in my ear. I wrenched my hand away.

I still had a chance. Frost would let my family go if I got him the magic pen. I'd finish Sr year. Life would be normal again.

I entered a hall with a table spanning as far as my eyes could see. A Santa-hatted workforce sat at either side, wrapping gifts. We passed into a second smaller room and—

"Nick, you must be freezing," rumbled the voice of an old man from behind an easel.

My captor shook his head. "I was trying to spend my spring break in the pool. But we have an intruder, Gramps."

The man peeked from behind the easel. White beard, red hat, jelly belly. OK, I'd found the real Santa and he was holding a pen.

Not any pen—THE pen. The magic one that drew the gifts. Santa motioned me forward and stared into my eyes for a moment.

I wasted no time. I snatched the pen & shoved it down my shirt, wedging it deep in my bra.

"Want me to get it, gramps?" Nick asked.

The old man chuckled. Then he went back to sketching, the pen in his hand again.

"Hm, what you want for Christmas—"

"How about your pen," I suggested.

Santa shook his head. "No need." He gestured for me to join him on the other side of the easel.

The ice cage holding my family was drawn there, but instead of them in it, Frost was the prisoner, his face a mask of rage.

Nick looked me up and down as if he knew what was coming.

"You get my grandson back to school safely, & I'll give you an early present this year."

"Why does he need protection?" I asked.

"Frost isn't the only person who'd hurt him to get the pen. And I've been watching you since you passed the Arctic Circle. You've more than proven yourself on the way here." He winked. "And the attempt at the pen wasn't too shabby either. You have a bright future as a bodyguard ahead of you. I think you'll be my best elf yet."

Nick raised an eyebrow & handed me a Santa hat. "Welcome to the team. Bodyguard."

Maybe I didn't want a normal Sr year after all.

Posted by Laura Rueckert at 8:00 AM 2 comments:

I love advent calendars (like you couldn't guess that one was coming).

I love seeing family and friends during the holidays.

The Christmas season seems to start earlier every year. This week alone we were invited to five Christmas parties. Next week, we have another four.

And then Christmas, the week after that.

(As if that wasn't enough, half the people in my family have December birthdays. Off the top of my head, I count seven.)

It's too much for me, so I am officially throwing up my hands.

Reduce: I've already cancelled out on two parties this week, and I'll have to cancel one next week also.

Simplify: I won't be making every dish to pass myself. Sometimes, store-bought will have to do.

Dare to be different: on the 24th, we'll have our second annual Christmas Eve Taco Dinner. Easy prep, the kids loved it last time, and there was more time for each other.

What tips do you have to make the holiday season less stressful? 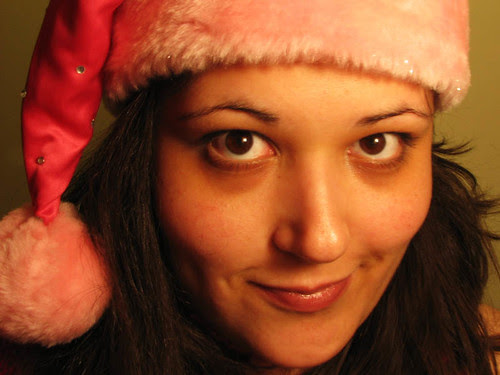 To read it, follow me @LauraRueckert or search for it via #YAadvent.

There will be one tweet each day from today through December 24.

Hope you get a chance to read it, and I'd love to hear what you think!

PS: If you're looking for this year's children's advent calendar story, click here.

Posted by Laura Rueckert at 9:05 AM No comments: