How I Earned 50,000 Mother of the Year Points in One Afternoon


Here in Germany, people rarely have air conditioning in their homes. We don't. Businesses often aren't cooled either. And the worst for me: my car is A/C-less.

So I drive the kids to appointments, to clubs, to their friends. And oh, how I sweat. Because when I "turn on" the 2-55 A/C, the kids complain because it whips their hair around. Yeah, it's pretty much sweat, curse softly, repeat.

Wednesday was the hottest day so far this year: 95° F. The kiddos BEGGED me to take them to the public pool. I really didn't want to. I knew the entire city was going to turn up. But I was trying to be a good mom. Swimming is good for the kids. So is socializing. Suck it up, Mom. Off we went.

First tip off that it was going to be no fun? Driving around for ten minutes trying to find a parking spot. Then we went inside.

It was the Swimming Pool of Despair. We managed to snag the last shady spot, but the air was blistering hot, so we immediately beelined for the water. Did you ever see Diary of a Wimpy Kid 3? Where the crowded public pool horrifies Greg? The pool in our town was worse. You couldn't walk three steps without running over someone. There was perpetual screaming. And relentless splashing.

My son turned around before he even got two steps in. He said the pool was too loud and scary. I'm with you there, I thought.

But he'd wanted to come, so I coaxed him in. He stood around for a few minutes, his eyes pinched shut against the constant spray. My daughter quickly found friends and had a ball. But twenty minutes later, my son was starving. Since there hadn't been time to pack sandwiches, my husband headed for the concession stand. Forty-five (seriously, 45!) minutes later, he finally reached the front of the line. My son burst into tears because they were running out of food and didn't have what he wanted anymore.  Argh.

I managed to hold out almost three sweaty hours:
-without a book (kind of a stupid experiment on my part)
-despite my glasses getting splashed (yes, you can call me Nerd Mom)
-including enduring multiple mosquito bites

And that's how I decided I earned 50,000 Mother of the Year points.

Today, my daughter asked if we could go back to the pool tomorrow—cringe! She wants her girlfriend to accompany us this time. Turns out, that girl's parents have never taken her to the pool. My daughter feels sorry for her (like she's missed out on this great cultural experience). I'll have to remind her the next time she accuses us of being the worst parents in the world.

How about you? What horrible thing did you endure for your or any kids?

Email ThisBlogThis!Share to TwitterShare to FacebookShare to Pinterest
Labels: kids

Anyone Have An Answer?


"Mama! Quick question before I go to sleep: where did the universe come from?"

My son is the King of Questions.

So I thought I'd beg for the wisdom of the masses: how would you respond to the myriad of things he wants to know?

Where did the universe come from? How big is it?

What size is the biggest battery ever?

How tall is God?

Was the Big Bang made by a huge gun?

What is a bowl of mush?

How can I be the Boss of the World? (Said he wants to prevent dictators in various countries from hurting people.)

Can we buy a Holy Guacamole?
(No assistance needed on this one. He means an avocado, and the answer is always yes).

So, do you have a brilliant answer for any of his questions? Or do you have a fun, cute, amazing question a child asked you? I'd love to hear it.

Posted by Laura Rueckert at 7:03 PM No comments:

Email ThisBlogThis!Share to TwitterShare to FacebookShare to Pinterest
Labels: kids


My mom died three years ago. Of all the items I took from her house while cleaning it out, none is more intriguing than this ring. 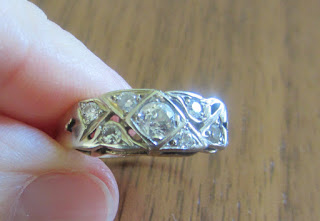 I've taken it to a jeweler who assures me the diamonds are real. And there are seven of them. So that's the first mystery. My mother was a stay-at-home mom for years. Later, she worked as a not-high-paid secretary.  While she always loved her jewelry, she was the first to admit cubic zirconia was her friend. Real diamonds? And this many? Hmm.

Second mystery. When I originally retrieved the ring, it was huge, with a cheap ring re-sizer wedged into it. My mom had pretty narrow fingers, even later when she had gained weight. She could have worn the ring with the re-sizer in it, but never in its original size. That means she got it from somewhere else.

Third mystery. The ring is old. The gold on the sides is rubbed smooth as if it was worn a lifetime. The stones were loose in their settings. My aunts and uncles have confirmed it didn't belong to their mother or even their aunts. It has all the signs of an inherited ring, but it wasn't from anyone in our family.

I'm actually not a big jewelry person, but I had a jeweler size the ring down and reset the stones. I wear it occasionally to remind myself that as much as you believe you know and understand a person, they can have their secrets. I think it's kind of cool that my mom has this one.

How about you? Have you ever found out surprising things about someone you cared for when you could no longer ask them? What did you think?

Posted by Laura Rueckert at 1:41 PM No comments: