I recently posted about products and prices from the 1909 Sears Catalogue. If you missed it, you can find it here.

One of the most fascinating parts for me are the instructions for ordering products from the catalogue. Nowadays, we go to Amazon, click items into a shopping cart, enter our credit card number and press the button to PROCEED TO CHECKOUT.

This is how they ordered in 1909.
You know what fascinates me?
1.    They don't care how you order as long as you do order. If you don't have an order form, you just write it on a scrap of paper and they'll send you the merchandise. Super flexible customer service.
2.    If you have trouble with English, then just write what you need in any language and they'll find someone who can translate it.
Can you imagine the reaction to attempting either of those today?
I'm not trying to be ridiculous here. I can see the importance of selecting exactly the product you need as opposed to entering "10 Meter hellgrauer Stoff mit dunkelblauen Streifen" and hoping they translate it to the exact product you require. But what really interests me is how sales-driven their customer service was, despite the work involved.

On vacation in Michigan, I've heard people scoff at occasional signs written in Spanish. On the internet, I've seen articles with headlines like "America Cannot Survive as a Multiple Language Country".

You can argue whether America is a multiple language country now, but we once clearly were just that. My own grandparents spoke German and Polish. And it wasn't considered an issue. When did that openness go away? When did it become so un-American to speak a language other than English?

What are your thoughts when you see how our ancestors daily lives contained other languages?
Posted by Laura Rueckert at 1:42 PM No comments:

While straightening up my overloaded bookshelves, I ran across a catalogue reprint my husband bought a few years ago. The Sears Roebuck And Co. Fall 1909 edition. 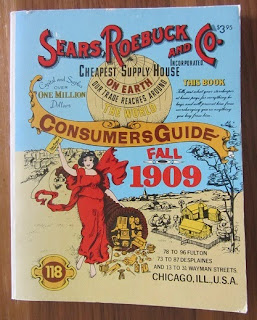 Talk about a headline that's short and to the point:
Cheapest Supply House ON EARTH

When my husband bought the catalogue, I couldn't imagine why.
...Just takes up space,
can't order anything anyway,
great way to gather dust…

But in leafing through it, I realize it's a snapshot of life in America over 100 years ago. 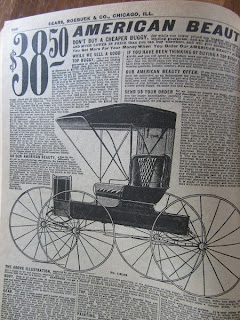 Although the prices were surely normal back then, they sound like a dream now: 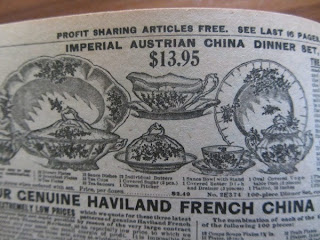 When was the last time you bought one of these?

Some of my favorite items are health and beauty products.


So, here's my question today. Which of our current products do you think people will look at 100 years from now and wonder at?

Thursday, September 12 was a big day for children in Bavaria: the first day of school. In our family, it was especially important because my son had his first day of 1st grade.

Now, I'm sure you're thinking that happens to millions of children all over the world. But, in Germany, the first day is a very special day. It's a milestone in their lives. First graders are no longer "little kids." They are Schulkinder—School Kids—older and more responsible than ever before.

And that is celebrated.

When my now 8-year-old daughter first started school, I was horrified at the preparation surrounding the day. You had to find the perfect backpack and build a fancy Schultüte (school-cone, see picture). Then you had to figure out what sort of goodies to buy to stuff it, in addition to all the other school supplies.

In the years since then, I've come not only to accept the weight given this day, but to see the value in it. Kids understand the first day of school as a real change, a positive change in their lives.

In our family, my husband and I both took the day off to accompany our kids to school, and their grandparents and godparents did also, until a party of six adults made their way to school that morning.

The day started with a non-denominational church service in the public school's gym (yes, they do that in Germany). Then the children were separated into their classes.  This is the most stressful time. Until then, they don't know which teacher they'll have. They don't know if their friends will be in the same class or not. Luckily, my son got the teacher he wanted and one of his good friends. Whew!

Next the teacher headed to the classroom with the new 1st Graders following. After them came all the parents and grandparents, packed around the edges of the classroom.


The teacher greeted the kids, encouraged pictures, and then pulled out a puppet, who had an embarrassing story to tell about his own first day. The children wanted to hear the story, but the puppet would only agree to tell the kids.

We adults filed out and drank coffee while the kids had their first few moments alone in school. Less than a half-hour later, the new 1st Graders stormed out, and we headed to a local restaurant for lunch. The restaurant got in on the celebration by giving every child who ate there that day a mini-Schultüte filled with candy and yoyos.

We rounded out the day with coffee and cake at home. And everyone who talked to my son that day congratulated him on being such a big boy—a Schulkind.

So what do you think? Is it a crazy, over-the-top way of dealing with school? Or wonderful rite-of-passage?
Posted by Laura Rueckert at 9:16 PM 3 comments:

Porcupines and Snakes and Bears, Oh My!


The blog's been pretty quiet for a while. First, I was preparing for vacation, now I'm on it (yay!).

The family and I have had an amazing time in Michigan. Thanks to the generous German vacation rules, we had three weeks to spend here. Among a million other things, I love seeing all the animals. Among our finds were deer, bunnies, turtles, geese, ducks, swans, cats, dogs, frogs, whooping cranes, an eagle and toe-pecking roosters.
Oh! And one fast-food-munching squirrel.
While camping, I heard rustling in the bushes. I assumed it was a bird and kept peering through the undergrowth only to find two porcupines. Way bigger than I expected! Maybe I'm uneducated, but I didn't know they had longish tails. And I didn't know they can climb trees either!

Later, we went wading in the Ocqueoc Falls, and I was searching for a snack in a backpack for my kids. My sister-in-law said I should turn around and look behind me. I saw nothing. Pivoted the other way. Still nothing. Now her voice was getting urgent, so I stood up. A snake! Three feet long and black. (insert shudder here)

I was too slow for a shot of the snake...but, later, I did save a butterfly from being trampled by careless swimmers.

Which brings me to the bears. A girl was attacked by a bear the next town over from where we were living with my dad. So I'm telling myself, we're safe here. That's a whole town away (yeah, like bears respect city limits signs).  So each night, when I left the safety of his house for the camper way, way across the dark rural yard, I calmed my jittery heart because there were no bears here.

Until I questioned my dad about it. Nope, they'd never seen any bears here. On the other side of the neighborhood, yes, but none right here in his yard. And those down the way were just little ones anyway.

Just little ones? As in Overprotective-Mama-Bear-Lurking-In-The-Shadows?  Gulp.

So far, we only saw two very friendly bears on this trip.
If you have kids and live in Michigan and haven't been to the Jellystone camp ground in Indian River, I highly recommend it. Bears and all.

How did you spend your summer vacation? Or have you seen any interesting animals lately?

Posted by Laura Rueckert at 3:33 AM No comments: