Well, duh.  It's not like the subtitle of my blog doesn't give a major hint, right?

But it's confession time.  Here's how much I like words.

When I first learned German, I used to sit alone in my room reading words out loud.  The thing I liked was the physical sensation of the word in my mouth.  I liked the feeling on my tongue.  The ch that can sound soft or chunky depending on how you produce it.  The harsh, back-of-the-throat rolled-R.  I practiced my long-forgotten Italian that way too, rolling the R at the front of my tongue like there was no tomorrow.

But it's not just foreign words.  One of my favorite websites is Merriam-Webster.com.  You not only can look up the meaning of a word, but synonyms and antonyms too.

Etymology hooks me every time.  It's fascinating how words change over the centuries.
The last word for which I looked up the origin was "vice".  I wanted to know why vice (bad habit) is used in Vice-President.  It turns out the word with the meaning "defect or shortcoming" stems from the Latin word vitium, meaning fault.  The vice in Vice-President comes from the Latin vice or vicis, meaning change, alternation or stead.  So, although it might seem that politics and shortcomings belong together, the identical spelling is purely coincidental.

Webster.com also has video clips.  What?  You didn't know that?  I've watched them all.

But wait.  There's more.  The award for the ultimate Word Nerd goes to me.  See this picture of me on vacation? 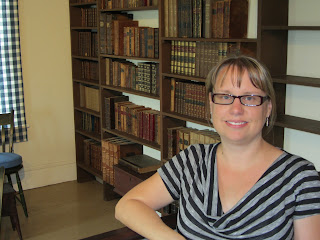 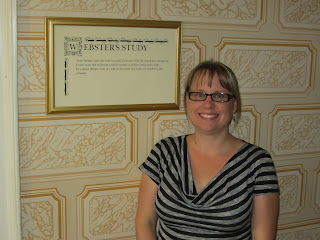 I not only visited the Noah Webster's house, I made my husband take pictures of me.
Don't I look proud?
I love, adore, treasure, savor, value, appreciate, cherish, and delight in words!
Posted by Laura Rueckert at 2:05 PM No comments:

Email ThisBlogThis!Share to TwitterShare to FacebookShare to Pinterest
Labels: I Love, merriam-webster, words

Last week I did some reorganizing in my kitchen. My cookbooks were scattered throughout the house. They really needed to be where the stove is, right?

Once I'd managed to collect them, the overwhelming truth was revealed. I own thirty-three cookbooks.

I'm not a gourmet cook. I'm not a master baker. Cooking and baking are fun, as long as I'm not under pressure to make things perfect for guests or quick for starving, whining children.

So which of these thirty-three books do I actually consult? Most often, I grab the 1075-page Better Homes & Gardens and the 1230-page Fannie Farmer heavy-weights. The recipes I use are often simple things like pancakes and muffins, where I just need the ingredient amounts. Or I check cooking times.

I love to sift through recipes, but only for inspiration. Meals never turn out the way the books specify. I don't like peas, so I use cucumber instead. No ricotta in the frig and the stores are already closed? Cottage cheese will work. Not to mention all the meat substitutes. And amounts are just suggestions anyway.

I admit to not regularly using most of the thirty-three. In fact, I've probably never even opened some of them. So why do I have so many cookbooks? Standing in the kitchen, gazing at them in wonder, I realized I had only bought three cookbooks myself.

Three out of thirty-three.

The others were bought by my husband, included in the box when I purchased some electric kitchen wonder, a gift or a hand-me-down.

I have a beautiful vegetarian cookbook from my sister-in-law. My husband bought a nice Italian cookbook. And at least seventy-five percent came from my mom.

My mom was a great cook. Patient and creative, she must have had it hard in a house with three picky kids and a husband whose favorite vegetable was a potato.

In 2010, my mom passed away, and I rescued her recipes from a trash bag before her house was sold. Holding on to her cookbooks is a way of keeping a bit of her in my kitchen...and in my life. So I guess, when I say, “I love cookbooks,” it's not the whole truth. For me, more than anything, “I love cookbooks” means “you'll always be here with me, Mom."
Posted by Laura Rueckert at 1:36 PM No comments:

Email ThisBlogThis!Share to TwitterShare to FacebookShare to Pinterest
Labels: cookbook, I Love

We have a Magic Table in our house. With absolutely no work whatsoever for my husband and children, it is set with plates and silverware two to three times a day. Cooked, nutritious food lines down the center, just in time for hungry mouths to devour it.

Then everyone leaves the room. The table may be covered with plates, bowls, hot pads, may be strewn with crumbs and smeared with I-don't-want-to-know-what. But by the time my family re-enters the room, not only is the table cleared, but all the dirty dishes are stowed away in the dishwasher. It may even be running already.

Whenever I'm feeling annoyed for the taken-for-grantedness of the Magic Table, I remember one thing.

I have a Magic Car. Winter tires are replaced by summer tires automatically, and vice versa. German government required safety checks are due, then suddenly, they're done. Best of all, my tank is rarely less than one-quarter full.

There's more practical magic in our house. German taxes are done without much more from me than a signature. Children's doctor appointments, sport classes and play dates happen without my husband even realizing it.

So when I wonder if it isn't too much to ask that empty water glasses be carried to the kitchen just one time, I figure my husband is probably wondering what short circuit in his wife's brain could forget to put the chicken wire that repels the cable-eating animal in our neighborhood (there really is one!) under the car. Yet again.

I'm lucky to live in a house so full of magic.
Posted by Laura Rueckert at 8:22 PM No comments: