I've had so much fun with flash fiction contests lately! Agent Janet Reid chose me as one of the nine finalists out of 85 entrants in her contest this weekend. I didn't win*, but she did say some lovely things about my writing (she used the words "gorgeous" and "beautiful!" ...Okay, I'll stop dancing now.)

Entrants had to write a complete story of 100 words or less using these words:
six
crow
spy
secret
weapon

For a spy, secrets can mean the difference between life and death. Of an informant. Of a partner. And betrayal is a weapon to be wielded like a scalpel, not a crowbar.

Six lights blink on my screen--six men track me through this rundown Latvian town. One used to be my Matthew, before he wielded the crowbar and became her Matthew.

They think he's one of them.

He thinks I'm still his.

I think...I'm all out of forgiveness.

From a burner phone, I text: Matthew Bennett = MI6.

One light winks out of existence. Like I said. A scalpel.

I hope you enjoyed reading my story as much as I enjoyed writing it!

*I highly suggest you check out the winner. Click the "nine finalists" link above. You'll never think of Winnie the Pooh the same again. :-)

Posted by Laura Rueckert at 8:32 PM No comments:

Flash Fiction - Learning How To Walk

This past weekend, I entered a flash fiction contest on Operation Awesome's website. If you're a writer and haven't been there, check it out! The other entries were great. Operation Awesome has loads of tips and tricks for writing, plus agent-judged contests.

For this contest, the piece had to be 500 words or less, and had to somehow include the writing prompt "learning how to walk." 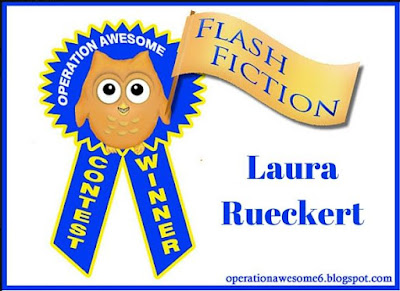 Learning How To Walk

The twelve-hour operation was over hours ago, but the anesthesia hit Amit harder than me. My first chance at freedom? Spent in bed, like always. It didn't matter that the nerves and ligaments and muscles were all in the right places now or that the nanobot results were stellar. Until Amit opened his perfect eyes, we wouldn't be doing any walking.

A nurse hurried in and checked our file. I bared my teeth at her. She scurried out. Ha.

With our right hand, I poked Amit's cheek. Dead to the world. How could the drugs affect him more than me? My twin and I shared half our organs.

I poked him again, then gave up.

TV was stupid. Internet was stupid. Amit had twice as many followers on Twitter. His smile never forced anyone away.

I turned to him. Maybe Amit's popularity would plummet...if they saw him drooling on his pillow.

I held my phone so both our heads were in the picture and smiled. Damn. Even with drool his face was friendlier. I clicked anyway.

Post-op. Waiting for sleepyhead so we can finally learn to walk.

Seconds later, I had twelve faves. I had fans too.

"Hey, Mahesh." Amit's voice sported that edge that said he was seconds from freaking out.

He rubbed his eyes with our left hand. "And the nanobots?"

"Doc says they're working as they should. Give 'em a wiggle." I held my breath. That had been the hardest part of watching him sleep: waiting to see theory turn into reality.

Our right toes flexed, then our left. With a grin, Amit lifted each leg in turn, bent each knee. "Have you tried?"

I swallowed. "Doesn't work for me. But that's what the docs said to expect, right?"

That same nurse skittered into the room. "Yes?"

"Wonderful. I'll let them know." She smiled at both of us. But longer at Amit. Whatever.

"Can you imagine, Mahesh? We can go anywhere now. We can walk into a restaurant. Stroll through a park. Where to first?"

I closed my eyes. Wide blue water, sparkling under the summer sun. Would it feel different from the hospital pool? "Granny's lake," I said.

Amit beamed while he paddled happily with our feet. "The lake it is!"

We bumped fists, and I cursed myself. Amit didn't deserve an asshat brother. With a shallow breath, I scrolled on my phone. Twitter. Own tweets. Delete.

The team of doctors stormed our room. "Gentlemen, who's ready to learn how to walk?"

Father squeezed into the corner, his camera ready. My cheeks stretched wide, even though I knew what it looked like to outsiders. Amit and I pushed ourselves up from the oversized hospital bed. We were ready.