I'm so excited to reveal the cover for my critique partner's next book! Plus, Caitlin agreed to answer a few questions, so don't forget to scroll down. There's even an intriguing excerpt! 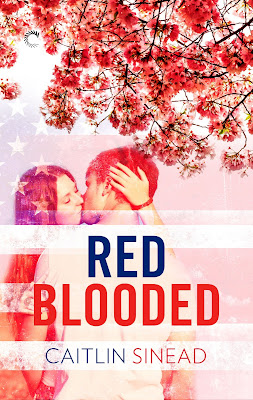 Here's what RED BLOODED is all about:
Instead of eating ramen and meeting frat guys like most college freshmen, Peyton Arthur is on the campaign trail. Traveling with her mother, the Democratic pick for vice president, she’s ordering room service, sneaking glances at cute campaign intern Dylan and deflecting interview questions about the tragic loss of her father. But when a reporter questions her paternity, her world goes into a tailspin.

Dylan left Yale and joined the campaign to make a difference, not keep tabs on some girl. But with the paternity scandal blowing up and Peyton asking questions, he’s been tasked to watch her every move. As he gets to know the real Peyton, he finds it harder and harder to keep a professional distance.

When the media demands a story, Peyton and Dylan give them one—a fake relationship. As they work together to investigate the rumors about her real father and Peyton gets closer to learning the truth, she’s also getting closer to Dylan. And suddenly, it’s not just her past on the line anymore. It’s her heart.

I loved reading this story. It's coming out in August, and I highly recommend adding it on GoodReads. Here's the link.

Now onto the interview!


Caitlin, where did you get your behind-the-scenes insight into the world of politics?

I’m a bit of a political junkie. I work on a policy journal just three blocks from the White House, so you’d think I’d get my fill of political buzz during my day job, but no. I love watching Washington Week, sometimes even on Friday nights when it airs. And nothing is more “fun” in politics than presidential elections. I definitely recommend both Game Change and Double Down, about the 2008 and 2012 elections, respectively. They are fascinating insights into our election process and the many characters who come in to play. However, to get more of a “daughter of” perspective, I also read Meghan McCain’s Dirty Sexy Politics about the 2008 election. I was on about my third draft when I read it and I was happy to see a lot of the things I suspected about what it might be like were confirmed. For example, there was definitely some negative tension between her and the campaign manager, just like Peyton has negative tension with the campaign manager in RED BLOODED.


Peyton has an auditory processing disorder. What is that, and what inspired you to write a character who has one?

So, the best way to describe it is dyslexia for hearing. I actually have it myself and basically, I can hear perfectly fine, but sometimes the words get a little jumbled. My disorder, like Peyton’s is pretty minor, but it does come into play in crowded rooms or when I’m on the phone (and don’t have non-verbal clues to fill in any gaps). I wanted to give Peyton her own cause, one that might conflict with the Democratic Party. As a student who needed some extra help, she especially understands how valuable great teachers are, and how harmful bad teachers can be to all kids, but especially kids like her. So she is interested in union reform, even though her mom and the presidential candidate would rather not get into that and annoy a valuable base of support.

I loved the sections "from" Peyton's father. Where did you get the idea to create his passages? Do you have a favorite quote from him?

Well, originally, he wasn’t “on the page” at all because the book takes place a few years after his death. But, I thought it was important for readers to know him and connect with him so they could feel the weight of the situation along with Peyton. I think I’d already decided he was a political reporter, so I figured, maybe he’d write a book about dying and I could sprinkle in what he wrote in the book. For a few different reasons, I later changed things up and made him a well-known culture writer (think Susan Orlean).

Here's one of my favorite quotes from him. :)
I’d like to say that Peyton’s brave, but, actually, she’s curious. Like me.
As a toddler, she’d look under her “big girl” bed before going to sleep. “No monsters tonight,” she’d say.
“Nope,” I’d say as I pulled the cotton sheet up to her chin. This was our routine until one night she grabbed my hand before I left the room. “Tell me the truth, Dad. One day, there will be a monster.” I assured her no, darling, you’re safe. There isn’t a monster under your bed and there never will be. She looked to the ceiling with moist eyes.


“But I have so many questions for him.”

That's a great quote. What are you working on now?

I've had a lot of fits and starts lately, but I have an urban fantasy idea percolating now that I’m pretty excited about. Fingers crossed this one takes off!

I blogged about Frankenstein's Beat Sheet at SCBWI!

Woohoo! The Society of Children's Book Writers and Illustrators (SCBWI) Germany-Austria chapter invited me to guest post on their blog about a tool I created to support plotting and reverse plotting (making sure plot points are where they should be once a draft is written). 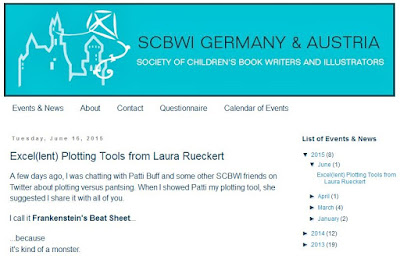 Posted by Laura Rueckert at 1:19 PM No comments: